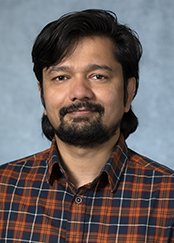 Ashok Sharma, PhD, joined as a postdoctoral scientist in the Casero Lab, an affiliate of the Cedars-Sinai Inflammatory Bowel and Immunobiology Research Institute. He completed his graduation and postgraduation training in pharmaceutical sciences followed by a doctorate in computational biology in 2018 from the Indian Institute of Science Education and Research in Bhopal, India. Later, he joined as a postdoctoral associate at the University of Minnesota where his primary research goals were to explore the impact of diet, lifestyle and host genetics on the gut microbial composition and function and its subsequent interactions with the host. At Cedars-Sinai, his current research interest is to study how microbial communities interact and modulate biological pathways and clinical phenotypes in animal and human models. He is mainly responsible for the analysis and integration of multi-omics datasets.

Yuande Tan, PhD, joined the Casero Lab as a project scientist and is affiliated with the Cedars-Sinai Inflammatory Bowel and Immunobiology Research Institute. He obtained his master’s degree in plant physiology from Zhongshan University, Guangzhou, China, and his PhD degree in animal genetics from Southwest University, Chongqing, China. Following postdoctoral training in evolutionary genetics and a master’s degree in biostatistics from the University of Texas School of Public Health—Houston, he joined the Neilson Lab as a senior bioinformatics analyst at the Baylor College of Medicine, where he developed novel bioinformatics methods to identify both differentially expressed isoforms and poly(A) isoforms associated with disease. He then joined the Institute of Personalized Medicine at Penn State College of Medicine and engaged in detecting genetic variants in somatic cells using DNA-seq data, and identification of genome-wide association of rare genetic variants with complex disease using GWAS data. Prior to joining Cedars-Sinai, he has held positions as a bioinformatics analyst at the University of Nebraska Medical Center and Baylor College of Medicine. At Cedars-Sinai, his research interests include: (1) the computational discovery and characterization of long intergenic non-coding RNAs (lincRNAs) and their potential regulatory role in inflammatory processes, (2) developing computational methods for single-cell sequencing technologies and their application in translational studies and (3) developing computational strategies for the integration of multi-omics datasets and the identification of causative factors and biomarkers in inflammatory bowel disease.