Simon Coetzee began his career performing bioinformatics analysis of genome-wide association studies data as part of the U19 GAME-ON consortium at University of Southern California. Since then, he has focused on the functional consequences of non-protein-coding risk regions within the context of many complex diseases. To this end, the Hazelett Laboratory has developed a software program called FunciSNP, which is an R/Bioconductor tool integrating functional noncoding datasets with genetic association studies to identify candidate regulatory SNPs (Coetzee et al., 2012). Coetzee has worked on analyzing and interpreting large genomic datasets, including next-generation sequencing from internal collaborations and downloading from public datasets such as 1,000 genomes, The Encyclopedia of DNA Elements (ENCODE), National Institutes of Health Epigenomics Roadmap and The Cancer Genome Atlas. At Cedars-Sinai, he is working with Benjamin Berman, PhD, and Dennis Hazelett, PhD, to develop automation tools for analysis and functional annotation of genetic variants from large genome and epigenome sequencing projects. Coetzee is also continuing development of novel algorithms for the analysis of gene regulatory sequences. 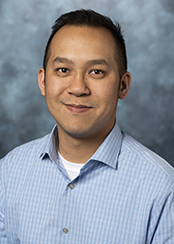 Peter Nguyen graduated from California State University, Fullerton with a B.S. in Biochemistry and from California State University, Long Beach, where he received a M.S. in Biochemistry. Under the direction of Dr. Deepali Bhandari, his M.S. thesis focused on delineating the molecular mechanism(s) that promotes cell survival during endoplasmic reticulum stress. It is through Dr. Bhandari that Peter developed a special interest in studying the biochemical signals that promote cancer cells to thrive which he hopes to one day use those findings to design and deliver potential therapeutic drugs to their targets. During his free time, Peter enjoys cooking food, spending time with Bear (his dog), and understanding the different mechanics/parts of a car.